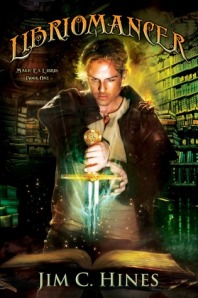 Isaac is a libriomancer, meaning his magic allows him to pull objects from any book. Sounds perfect for a man who works as a librarian, right? Well, unfortunately, the powers-that-be have forbidden him from using his magic, except for emergencies. The action in this book begins when said emergency finds Isaac in the form of 3 vengeful vampires out to kill Isaac – a revenge killing for they believed he had slain one of their own. With quick actions and even faster thinking, Isaac uses the books in his library to defeat the vampires. He learns the death of their fellow vampire was not the only murder of the supernatural beings that share this world. And all the murder has more than just vampires riled up and out for revenge. As talks of war begin to brew, Isaac sets out to find and stop whoever is behind it all. And he doesn’t embark on this quest alone. Smudge, his overanxious fire spider, and Lena, a sexy, wooden-sword wielding, dryad, join him in this fast-paced, page-turning, hilarious novel, complete with a complicated love triangle.

The concept of this book reminded me of the movie Inkheart. However, Isaac is much more interesting than Fraiser’s character was, and I LOVED Smudge!  Seriously, what book is complete without an easily spooked, sponteneously combustable, fire spider. I especially loved the part at the end when Smudge dances a little jig while covered in white hot flames – made me laugh out loud. One of the ways the story kept my interest was by referencing so many other fantastic works – and at the end, Hines provides you with a list of all the books referenced (including the titles he invented just for this story)!!!
My to-read list has a lot more titles now – always a good thing. Jim Hines also does a nice job dangling a carrot at the end. Can’t wait to see what adventures Isaac and Smudge are going to have in book 2!

For more information about Jim C. Hines, check out his website!